June 08, 2015
So many of us consider our lives stressful, the demands of family, the pressures of work, the problems of the daily commute; but nothing is new!


The three part television series , ‘Armada – 12 days to Save England ‘– I mentioned  on Facebook on Friday showed Queen Elizabeth I waiting for news of the English fleet engaged in combat with the Spanish galleons in the English Channel.  Elizabeth, the Virgin Queen was always urged to marry to safeguard herself;  there was a strong move in the country to re-establish the Catholic Church, without an heir, tormented by nightmares and the strain of keeping up appearances if the Spaniards had landed on English soil her days would definitely have  been numbered. 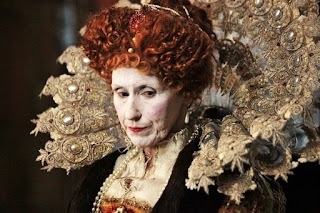 So, in this excellent series she is shown sitting with her ladies waiting for news and stitching the most beautiful piece of embroidery, it looks like cut work to me


I heard Anita Dobson who plays Elizabeth I in the series talking on the radio, that it took more than 4 hours in Make-up to create her ageing and the importance of looking wonderful to her Court.   I long to ask whether the piece of embroidery was a prop or whether Ms Dobson is also an accomplished stitcher herself! 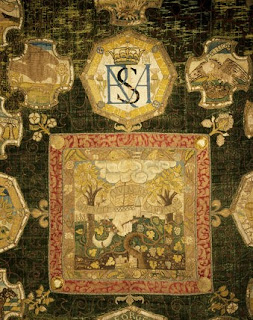 Mary Queen of Scots – Elizabeth’s rival for the English throne – was held prisoner for 17 years at various great houses,  Hardwick being the most famous, and she worked some magnificent pieces of needlepoint.  The Oxburgh hangings, panels of fine tent stitch mounted on velvet bed curtains can be seen at Oxburgh in Norfolk.
Her life too, must have been extremely stressful being sent as a child to the French court without her family, married to the Dauphin who became King Francis II but who died only a few months later leaving Mary just 18 years old.  Rather than live under the domination of her Mother in Law Mary moved to Scotland before being imprisoned by Elizabeth being a serious threat to the Monarch


It is recorded that her jailer’s wife, Bess of Hardwick sat with her stitching and trying to have some attempt of a normal life.  Quite pleasant one would say, but NO, she was surrounded by people who reported any comments or moves to Elizabeth; she was frequently moved, often at night, to a new location to foil attempts to rescue her.  Her embroidery was a form of therapy and many of the motifs she stitched expressed her private thoughts as all her written correspondence was monitored by her captors.
More recently I believe that many actors and opera singers stitch before and between performances, Henry Ford, Hardy Amies, Joan Sutherland to name just a few.  One can imagine on a film set or in one’s dressing room sitting quietly stitching could have a calming effect.
I know how much I relax whenever I can stitch for an hour or two – the pleasure of concentrating completely on colour, the choice of stitch, the rhythm of the stitching and, at the end, what has been achieved
If not already, try some needlework, even for complete beginners Florentine designs can be perfect, make friends with your shop owner, join a class, meet other people or stitch contentedly with a play, music, or my favourite, a talking book.  Remember how for many centuries people (mainly women) have coped with major stress in their lives.
Anita Dobson Bess of Hardwick Hardy Amies Henry Ford Joan Sutherland Marian Housing Mary Queen of Scots Queen Elizabeth I 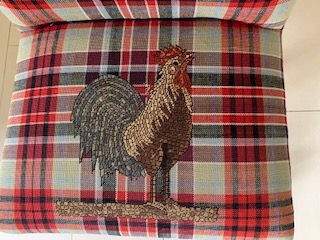 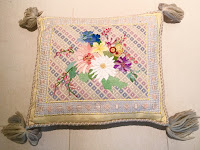 Since writing my last blog in July many things have changed.  I think we all hoped that the contagion rates would continue to fall and hopefully, September or early October would begin to show some normality in our lives . Sadly that was not to be, in fact, it is unlikely to be normal by Christmas or even further away;  other countries are similarly affected and the prospect of a lockdown in a British winter is not good! However, for us who enjoy stitching or indeed any craft making beautiful things, many aspects are positive, we are very lucky.  My plan to keep a record of stitching during lockdown is progressing;  the exhibition to share these pieces will have to be postponed but it is not forgotten - so please continue to send me details and photos of anything you are doing.  I love to hear from you and will add your information to my records. So far the projects you are stitching range from one American friend finishing more than ten pieces plus two fresh cushions for new grandchil
Read more